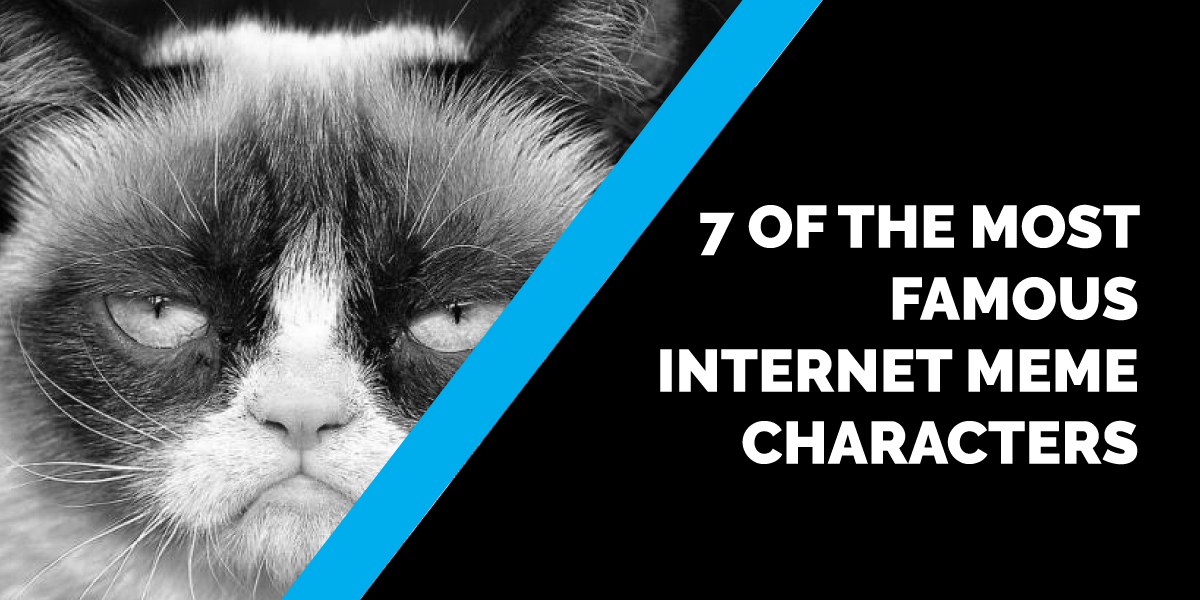 7 of The Most Famous Internet Meme Characters

Some of the most famous memes have started as unassuming photos and screenshots. And like ideas, they evolve as they’re shared.

Just like in the movies you watch, books you read, or series’ you binge, it’s the characters that drive the story. Or, in this case, the meme.

Whether they make you LOL or roll your eyes, memes are attention grabbers. And a meme is only as good as its character.

Here is a list of some of the most famous internet memes and the characters that make them go viral.

A cat with a particularly sour and human-like expression is the force behind the Grumpy Cat memes. And he is one of the most well-known, loved, and comical memes of all time. Grumpy Cat found its origins on Reddit in 2012 when photos of the cat were posted online.

Grumpy Cat became so popular that he bred all kinds of spin-offs: stuffed toys, books, t-shirts, and even a coffee drink.

Sadly, Tardar Sauce, aka Grumpy Cat, passed away in May of 2017. But his memes live on.

Armed with a trio of Goosebumps books and an overzealous grin, Ermahgerd Girl exudes nerdy enthusiasm. After debuting on Reddit in 2012, the photo soon represented “Ermahgerd,” aka “Oh my God” levels of excitement. The text accompanying “Ermahgerd” is similarly misspelled in—one can guess—an attempt to portray a young girl with braces.

Ermahgerd girl started many spin-off memes featuring everything from animals to babies.

People will recognize this well-dressed character (played by actor Jonathan Goldsmith) from the Dos Equis beer commercials that began in 2006. The meme portrays a sophisticated gentleman with a variation of his original catchphrase: “I don’t always drink beer, but when I do, I prefer Dos Equis.”

Video spin-offs of the meme were born. And Jonathan Goldsmith even hosted a couple of AMAs (ask me anything) for charity on Reddit.

The famed condescending Wonka character comes from 1971’s Willy Wonka and the Chocolate Factory. Played by the late Gene Wilder, Wonka became a popular meme in 2011 when Redditors began making them from a screengrab.

The screenshot was taken from a moment in the film where Wonka is trying to inspire wonder. But in the frame, his wide-eyes and slight smile come off as arrogant. And it birthed the sarcastic, sometimes insulting, humor that defines the famous meme.

The famous “Success Kid” meme was born from a 2007 photo of a baby at the beach. With his fist clenched full of sand and a determined expression, it is generally used to show small victories and wins—the kind that happens to a regular person throughout the day.

Success Kid became famous in 2008 when the picture of the smug child (Sammy Griner) was used across social media.

In 2015, the Griner family used the meme for its ultimate success: to promote a GoFundMe campaign for his father’s kidney transplant.

Two popular versions of Fry from Matt Groening’s Futurama occupy the meme world: “not sure if” and “take my money” Fry.

In one version, Fry’s eyes are narrowed in suspicion. And in the other screengrab, he’s waving a handful of money and yelling, “shut up and take my money!” The latter being used on the internet when someone finds something particularly likeable.

The Philosoraptor—born from a t-shirt image—has become the subject of countless memes. The raptor is shown pondering the philosophical questions you wouldn’t expect from a dinosaur. Examples include: “If we’re all different, doesn’t that make us all the same?” and “is there another word for synonym?”