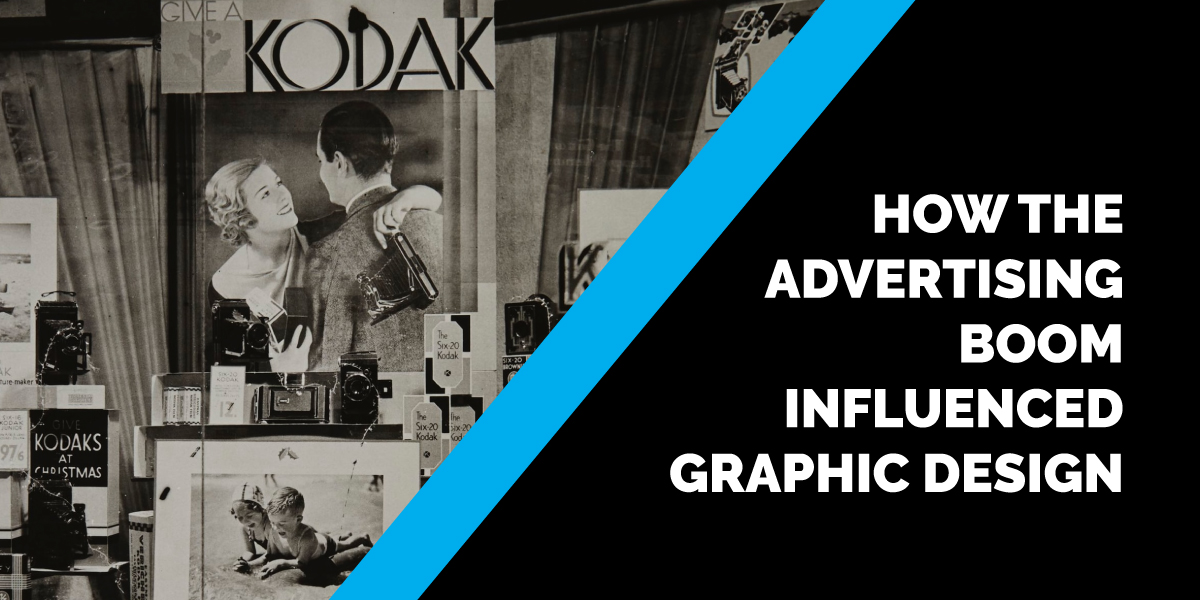 Creative movements rise and fall with global events and economic conditions. Throughout history, global events like recessions and war have led to new developments in art and society.

After World War I, a rise in prosperity and technology produced the lavish Art Deco movement during the Roaring Twenties. With the Second World War, though, things became more practical and stark. Post-World War II, art and design picked up—and they haven’t slowed down since. This is especially true with graphic design.

The advertising boom of the 1950s saw a rise in the need for packaging and advertising designs, and consequently, the graphic designer.

Historically, art and graphic design have been connected to developments in technology, politics, and media. Even though we don’t always think about how historical events influence visual mediums, they do. Art both shapes and is shaped by the culture and world around it.

After the Second World War, the economy recovered once again, and technology flourished. The boom was reflected in everything. But it is especially apparent in the world of advertising and graphic design.

The advertising boom followed the World War II propaganda posters of the 1940s. Advertising and magazine publishing became influential forces in economic growth. Design became more daring and obvious in terms of graphics, symbols, and text. And as things started to become more optimistic with the economy on the upswing, so did design. There was also a higher need for advertising and packaging designs. With this new optimism and potential for advertising, came new eye-popping design styles.

By the 1950s, design became more exciting. And the 50s landscape—TV, radio, comic books—was well-suited for advertising. You could feel the energy in ad designs, from the colors to the subjects. And sex sold everything from cigarettes to soda. But not all of these ads were sensational. Many depicted a more everyday scene straight of American, middle-class life. If sex appeal couldn’t sell a product, then a happy family could.

Generally, advertisers during this time were experimenting with several techniques to find out what worked with audiences.

The rise of the graphic designer

The advertising boom was influential to modern-day graphic arts, and the 1950s saw the rise of the graphic designer. Saul Bass, a famous graphic designer and filmmaker, was known for some of the most famous logos in American history—like Quaker and Kleenex. He was also celebrated for the stunning visual impact his contemporary use of color and abstract designs made. An example of his influential work is seen in the posters he designed for Alfred Hitchcock and Stanley Kubrick.

Paul Rand was another American graphic artist who was famous for his corporate logo designs—like those he did for IBM and UPS.

Some of the typical features of the advertising boom style were:

Even though the style of the advertising boom has become retro, it has influenced many graphic designers. Internet-savvy millennials and Gen Zers wouldn’t let brands get away with the in-your-face sales tactics of the 50s. But even though today’s consumer may be less naïve and optimistic, the vintage graphic design of the time—from typography to graphics—is still admired today.