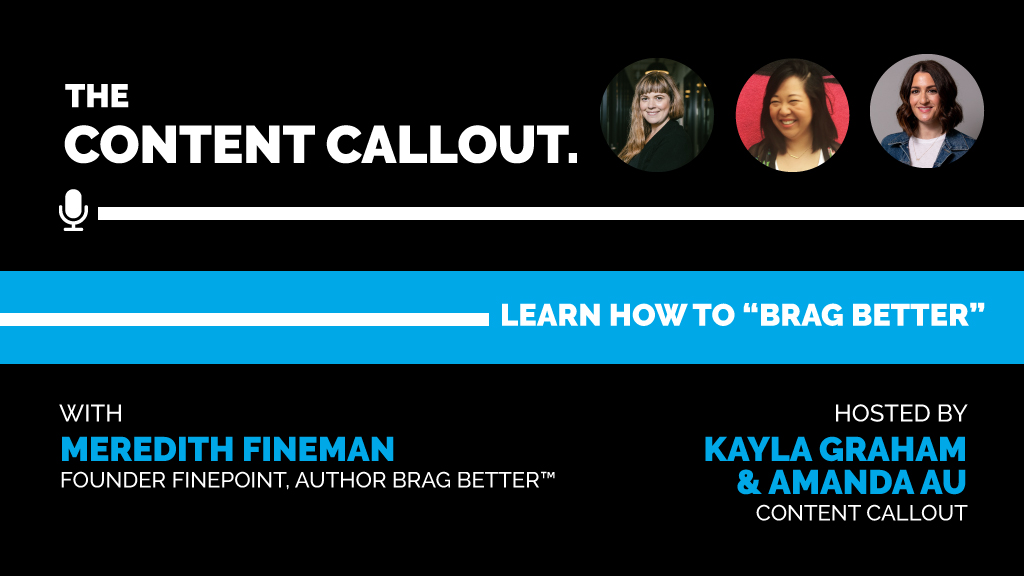 Learn How to “Brag Better” with Meredith Fineman, Ep #29

Meredith Fineman has been a freelance writer for 15 years. She writes about women’s issues, business, entrepreneurship, leadership, and how they intersect. She has built her own personal brand—writing, speaking, and doing events. As she was cultivating her business, she was watching the trajectory of women.

She saw young women that couldn’t talk positively about their work. She also saw friends undercut and sell themselves short. In the fall of 2013, she booked a client on TV. This woman was perfect for the job, but she didn’t do it because she didn’t feel qualified enough.

That’s when Meredith realized that many people need to learn how to brag. What is her definition of bragging? How can it change the trajectory of your career? Find out in this episode of Content Callout!

The negative connotation of bragging

Everyone has a different connotation of the word “brag”—but it’s usually negative. Women especially have a hard time writing about themselves and almost feel that they’ll be punished for doing so. It’s difficult to talk about yourself because it’s an act of vulnerability.

Meredith defines her audience as the “qualified quiet”—the people who have done the work but don’t know how to talk about it. It’s the people who are thoughtful, well-read, researched, and accomplished that are scared to brag. It’s deeply intertwined with privilege and the ability to be heard. But bragging is a skill and a tool—when used correctly—that can advance your career.

Bragging is a skill to be embraced

Historically, positive attributes of women were associated with passive behaviors, such as shyness. Women were hailed if they were poised, demure, or unassuming. Passiveness was expected. Women are judged on metrics that men are not, from their voice, their hair, to how they dress. It makes it difficult for women to “brag” because society has relentlessly pushed for the opposite.

Women need to overcome the societal expectations of the past. Meredith firmly believes that bragging—at least her definition of bragging—is an essential skill. Meredith defines bragging as “Stating true facts about your work strategically and cohesively to advance your career.” She has proven that finding the words to share your work is an essential and necessary skill.

Is the use of self-deprecation helpful to your cause? Can you brag too much? Listen to hear Meredith’s thoughts on this popular tactic.

Bragging better is about control

Meredith emphasizes that you want to be in control of the narrative you tell others about your career. Never leave it up to the reader to infer who you are and what you do. You need a long, short, and two-line bio that you update quarterly.

If someone asks for a short bio but you only have a long one, that’s what gets sent. That person is going to cut it down to what they think is important about your career. But you should be the one telling them what’s most important.

Meredith was speaking at a conference where her bio was shortened and didn’t include that she had written a book. Her bio was printed in a pamphlet in 1,000 different hands, and none of them knew about her book. It was a huge missed opportunity.

You want to tell people who you are, what you’re about, and why you’re good at it in 30 seconds or under. Whatever you decide your personal brand has to be, you have to tell people what’s important. If you leave out key awards, it makes a difference in terms of who will hire you. Set yourself up for success.

How to be an ally for the qualified quiet

You have to get the qualified quiet to turn up the volume. We have to make sure that our media, stages, and televisions reflect a diverse group of people. You have to recognize that bragging is a skill that you possess that others may not.

So how do you advocate for others? Ask how you can help. Get their permission. Ask if you can share their work in an upcoming meeting or if you can send their article to an editor. Even echoing their sentiments on a zoom call can make an impact (which Meredith believes men need to do more of).

Her book tiptoes the line between professional development and self-help. You can’t just tell someone to be more confident. It’s unfair. People need something specific to grasp. That’s why her book isn’t based on emotion—it’s based on tactics. She shares examples and interviews.

How do you be an ally for the qualified quiet? How do you uplift your coworkers and friends? Meredith shares plenty of useful tips, so listen to the whole episode!