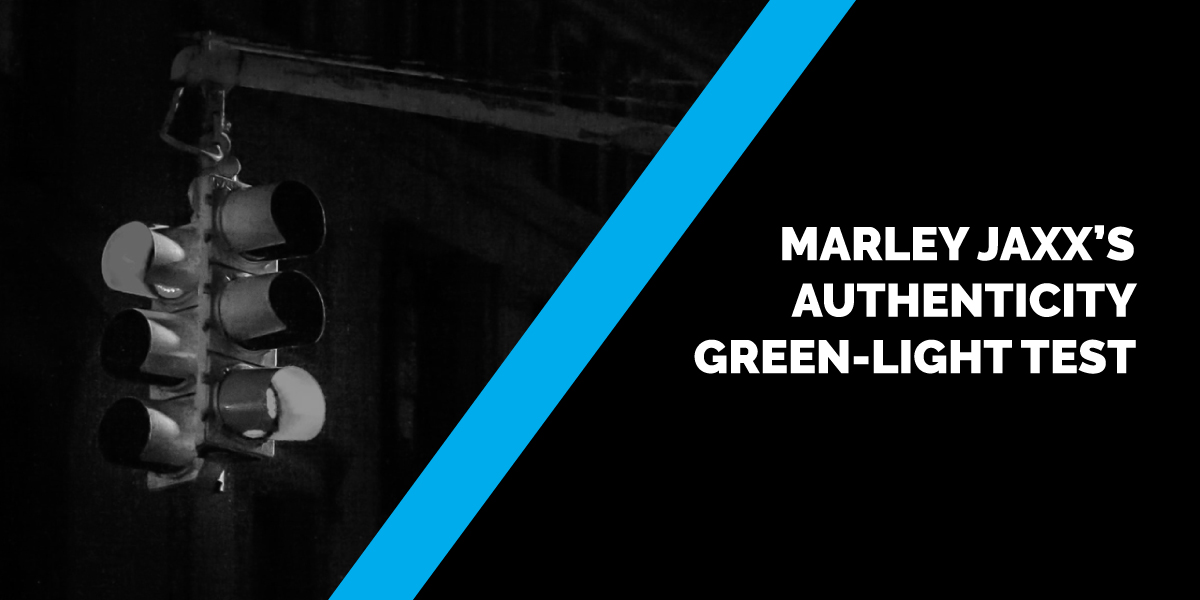 “There is a difference between hot mess and powerful message.” – Marley Jaxx

Marley does believe there is a line you shouldn’t cross with your content. So she created an authenticity green-light test to help her determine her notices for sharing something. She is always sure to ask herself:

Do a check to see where you are at emotionally before you post things. Marley went through a divorce just weeks before speaking on a stage of 5,000+ people. It was a huge goal, and her audience was excited for her. But she had to announce that she changed her name—and why. She wasn’t entirely sure she was ready to share that.

Brene Brown says you need to “Share the scars and not the open wounds.” Marley was in a place where she felt like she was tip-toeing around the open wounds. She was trying to be vulnerable. She didn’t want to be “the divorced girl” that people watched on stage, waiting to see if she would break. She wanted her content and message to be front and center.

It’s a great example of how to share something vulnerable while still being tactful. She didn’t want sympathy. She wanted her story to be one of perseverance. She wanted people to respond with strength or encouragement. It was an amazing opportunity. All eyes were on her. They wanted to know what she would say.

Choose to be real + authentic

Through the struggles of that time, Marley had considered quitting creating content. Why would anyone listen if she didn’t have her life together? If she was broken? But she realized she could reach all the people that were meant to hear her message. She realized, “Helping people doesn’t stop just because your life isn’t perfect.” Her message can inspire other people. She chooses to be real and authentic when a lot of influencers are a highlight reel. In sharing something vulnerable, you’re sharing real moments. It makes you more relatable.

Your vulnerability creates a safe place

While Marley was recovering from her divorce, she went away for a healing retreat. She told her followers that she wouldn’t be on social media for about a week because she was dealing with some of the worst emotional pain she had ever felt. She needed space to get back to “me” again.

So she asked her audience: “Does anyone else feel like the rug was pulled out from under you?” Your vulnerability allows other people to feel safe instead of feeling like they’re alone. You don’t have to be perfect and have it all together. Her honesty allowed other people to cultivate self-awareness and realize it was okay to put themselves first.

It isn’t just about building businesses

That therapy created a before and after in her life. It allowed her to learn about herself, her purpose, and what she wanted to do with her future. She isn’t just teaching people how to build businesses. She realized she’s helping build the people that create the businesses that change the world.

When you’re teaching someone how to sell their products and services, it’s because she believes that the transformation is in the transaction. You invest in yourself and grow into who you were meant to be. You have to remove blocks and baggage and the things you believe about yourself. It’s what she had to do to get where she is now. But she’s careful to note that it’s a continuous journey.

To learn more about video marketing, storytelling, and turning content into cashflow, check out her 21 Days to Infinite Video Impact Challenge. It’s a full framework of how to implement her system into your business. To hear the rest of the conversation about monetizing your content and building a brand that begins with who you are, listen to episode #27 of the Content Callout podcast!