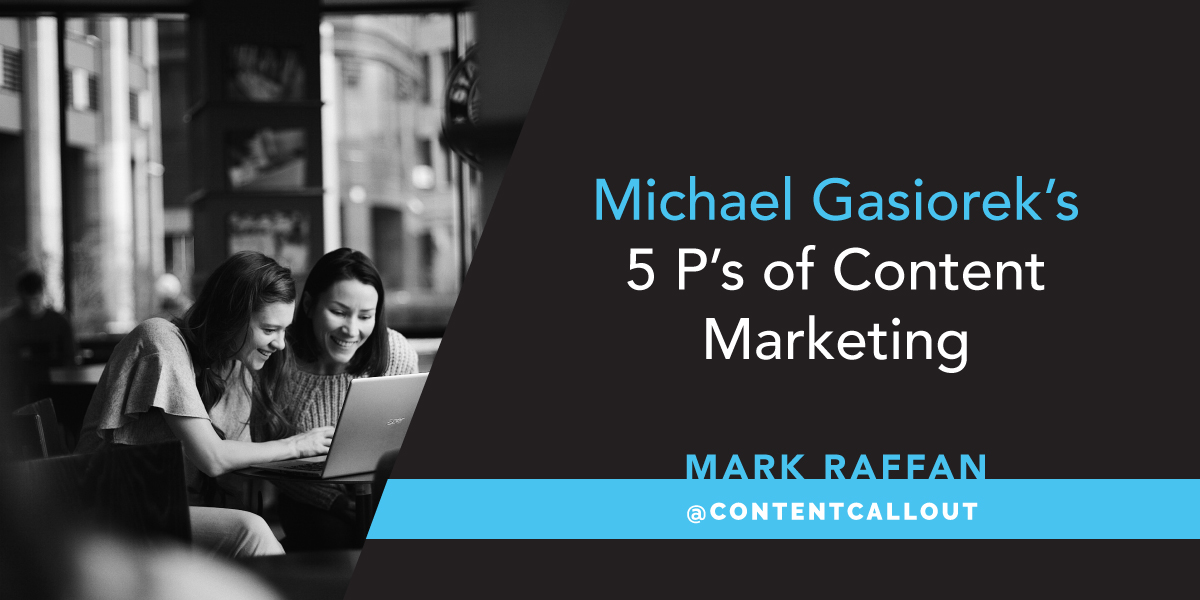 What are the 5 Ps of content marketing? How can embracing them be a gamechanger for creating authority in your space? Michael Gasiorek guarantees that this process will work.

90% of the content that was produced at Startup Grind (that Michael helped build from the ground up) was user-generated content. They used a guest-posting style inspired by Huffington Post and Business Insider. To do that, they had to educate every writer coming in quickly and thoroughly. Two things proved to be very important.

Everything was built off of those two questions. If you have the questions and the categories, the five P’s is the “doing” part. It’s how you split up the roles and responsibilities of the team. They all needed to divide and conquer. So producing and publishing great content was divided into five things. The whole process is decided before you start.

How do you make sure the tone and the voice are consistent? What if the editor feels like the tone is off and everything needs to be changed? Michael builds out a spec of work that not only includes their question, what they’re writing about, and the tone but also includes what the piece should look like on the way out. They get sample posts by them and links to their social media. Then the editor is educated so that every step quality checks the tone.

They onboard clients slowly and carefully, one piece of content at a time. Then they record a podcast episode so the editor can hear how they talk. Content Callout records an episode with someone and then uses that to create a voice guide that’s used throughout the entire process.

Publishing might be as simple as publishing on the company blog or a newsletter. But Michael believes that only doing that can leave a lot of money on the table. How do you change that? You want to think about syndication and guest-posting. You want to remix the content and publish it in multiple different places. You have to focus on how many times you can get a post up in such a way that is net-beneficial (avoiding duplicate content penalties). When people think about the syndication of content, they think about the SEO implications. That’s where canonical tags come in.

If you publish a piece of content, it gets crawled by Google. Google will put a flag in the ground and claim it as the original piece (but it HAS to be the first one crawled). When Google sees other examples of that piece written somewhere else, it might penalize both. How do you save yourself from that risk? A canonical tag. You tell Google where the piece was originally published and that you’re okay with it being published on another website, as long as you get the credit. You use a canonical URL to do it.

Google will tell bots to go to the original piece that the canonical URL points to. It’s a way to tell Google that you meant for it to be published multiple times. You keep the SEO juice, but you get a sizzle in the pan for publishing it somewhere else with a higher domain authority. So the whole publishing question answers, where you syndicate, where you publish, how it’s edited to be published multiple times, and how you remix it.

Where are you going to promote your content? Startup Grind had a lot of help from users that promoted their user-generated content. They had tons of social media exposure. They did absolutely no paid advertising. They needed a high ROI without a lot of spend, which is why content SEO was killer for them. These days, Michael does performance-based brand marketing because they can get the ROI they need.

You have to do work to grow your fruit tree. Michael says you have to ask, “What are you going to do to make the fruit worth the squeeze?” When they thought about the content, the cost of production was close to zero (they paid an editor). When you’re working with a client and are going to charge them per post, you want to know what ROI they expect out of it. They can optimize around email capture, retargeting, general traffic, and sharethrough.

Some content can be part of a funnel with a lead magnet (like an eBook) which leads to joining or buying something. Their funnel progression is always email to events to conferences. They made sure that all of their pieces eventually led to a funnel. They saw a lot of email signups and social media attention. But you don’t figure this out after you’ve done it—this has to be part of the planning phase. It has to cover all 5 Ps.

Michael lays out even more content marketing strategy and tactics in episode #46 of the Content Callout podcast. Go check it out!