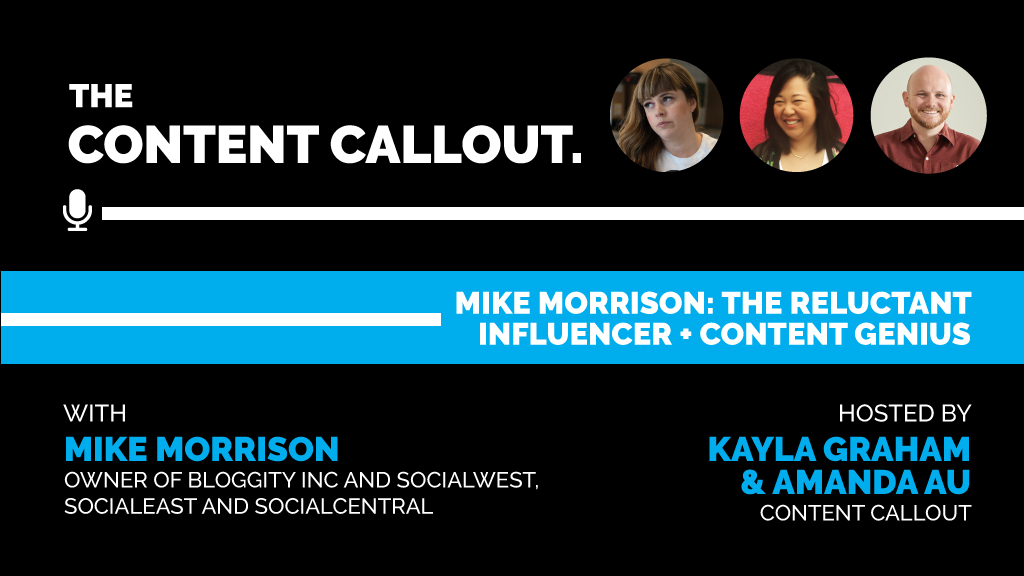 Mike Morrison never set out to become a successful influencer. His blog was born out of a desire to do what he loved: write. He never imagined he’d make money with it. But it snowballed into some incredible opportunities—including being a TV producer for Breakfast Television for four years.

But Mike began to make money with his blog, and eventually took the leap and left his full-time job to become a full-fledged influencer. Now, Mike is hesitantly famous. He writes frequently on his blog, founded Bloggity Inc., and runs the Social at Home Conference. To hear his incredible journey and what you can do in the influencer world, give this episode of Content Callout a listen.

The little kid in Mike can’t believe people know his name—and it’s as well-known as he wants to get. He likes people seeing his face and stopping to say hi. But he jokes that he’s “An introvert trapped in an extrovert’s career.” He’d rather sit and have coffee in a coffee shop than be in a position where he’s recognized and on the spot.

It’s key that he doesn’t take it seriously. His journey happened organically. There was never the intention to immediately make money. He grew into it. He points out that he was lucky that he started when he did and lucky enough to make money from it. What does he think led to his success?

He believes part of it is that he doesn’t have any pretenses. He doesn’t project a personality that isn’t himself.

Is the influencer market saturated?

Mike has been doing this for 15+ years and points out that it’s a lot harder to get noticed now. When he started blogging, media outlets were looking for bloggers to interview and highlight. There weren’t many bloggers at the time, so he stuck out well. He knew how to carry himself in front of cameras, knew what an interview was, etc. so he did well in the space.

He points out that if you launch now, you’ll want to focus on a micro-audience. He emphasizes finding something you’re passionate about and focus on that audience. If you have 1,000 followers, you can be more influential with your audience and platform. Mike notes that he writes in a very broad category, so his blogs only hit certain people at certain times.

But if you choose a niche and write content, say, JUST for Vegans, you’re likely to gain more traction and build a committed audience.

Why Mike HATES the term “Influencer”

You need to have a strong WHY

Mike points out that you have to think about WHY you want to be an influencer. There are months that he doesn’t make any money from it. He still has to make a living. But he likes putting content out there because it fills his tank—paid or not. His advice? Find your niche and hone in on it. You have to own who you are.

He unashamedly admits that he thinks all red wine tastes the same. He LOVES McDonald’s. He doesn’t care about clothes or dressing nicely. He started with different motivations other than making money, and that’s allowed him to be truly comfortable being himself. He doesn’t have to pretend or put on a performance for his followers.

He says you often see influencers portraying themselves a certain way that may not be 100% realistic. Some do it for fun, others are just mirroring what they see. But there are more middle-class people with a little money to spend on a vacation here and there. There are more people like Mike than the people portraying the 5-star VIP lifestyle. It makes more business sense to appeal to a wider group of people.

In the rest of the episode, Mike shares his passion for advocating for LGBTQ rights, all about his Social At Home conference, and how influencers must always be prepared to pivot. Don’t miss his fascinating story!