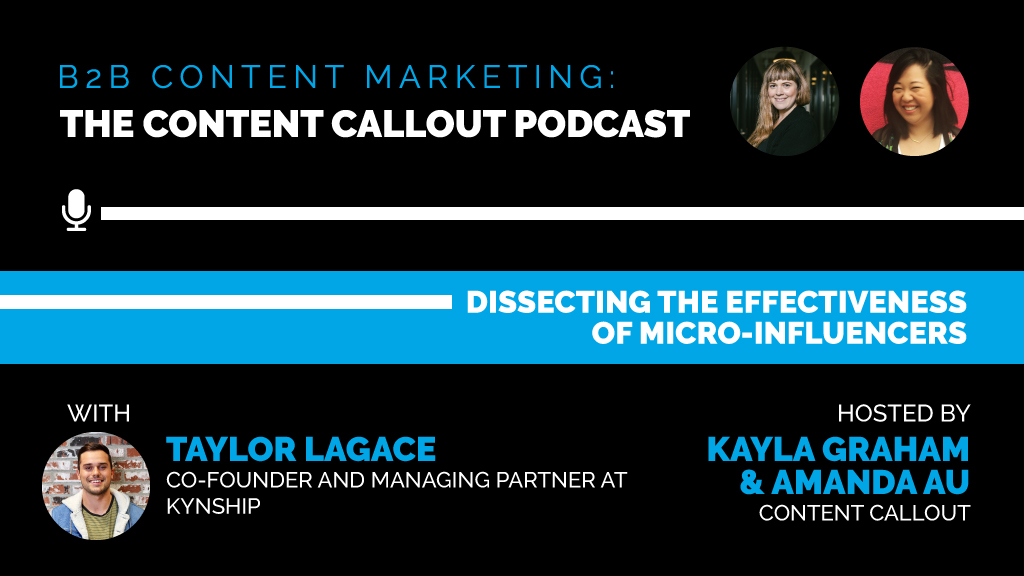 Dissecting the Effectiveness of Micro-Influencers with Taylor Lagace, Ep #41

Many people are familiar with macro-influencers, i.e., celebrities, athletes, or the contestants kicked off the Bachelor trying to launch their career. Macro-influencers usually have hundreds of thousands to millions of followers. On the flip side, micro-influencers may have between 100,000 to 450,000 followers. According to Taylor Lagace—the Co-Founder and Managing Partner at Kynship—they can be just as effective.

Any industry will have those people that are recognizable by face, and some are recognizable at the celebrity level. But the nano and the micro-influencers can still be effective. You just have to find the niche you’re trying to attack. So how do you do that? What’s the best way to use influencers to market your brand? Listen to this episode of The Content Callout to hear Taylor’s strategies.

Why micro-influencers are important

A lot of brands want to leverage influencers for brand equity and validity, but they still need a return on their investment. So if a one-off social post with Clay Matthews that costs $50,000 doesn’t return the same amount, you won’t see retention.

With micro-influencers, it’s about the content being produced in comparison to using them as a mechanism of distribution. They have a more niche audience with greater engagement. Organically speaking, micro-influencers can be more effective. $50,000 with a micro-influencer can get you 50–100 posts reaching a greater number of followers, with more engagement, and a better ROI.

Even better, Taylor points out that you’ll likely get to own that content and repurpose it across your marketing channels. Your money can go a lot further. If you’re going to use an influencer, he recommends you start with a micro-influencer and test which categories work best for your brand and scale up to a macro-influencer.

So, we posed the question: Do you seek organic posts from influencers? Or is there a better way?

According to Taylor, organic posts can be great, but they aren’t as effective as Facebook marketing. Facebook is a great way to distribute the content that your influencers are creating outside of the limited audience that they have. You can do that through white-listing (serving ads from the influencer’s handle and targeting their followers).

Influencers can only reach up to 10% of their audience through the posts that they have, which is incredibly limiting. Plus, the price points for organic posts are highly inflated. In reality, if you’re only reaching 10% of the audience with a post that doesn’t exist 24 hours later, it’s not that appealing. Influencers don’t realize that the real value is the content itself.

But if you can own the content and distribute it yourself, that’s all you want. It can also lower their pricing if they’re not the ones posting. Likely, the people who follow that influencer will still see those ads. If you advertise the right way, you aren’t limited to only 10% of someone’s audience—you can reach all of them. You can create a customer journey out of it. It’s more lucrative and expansive.

How does Kynship determine creative success with content? Why does the distribution of the content matter? How should content be different in each part of the customer journey? Listen to find out!

Kynship does Facebook and Instagram advertising, which includes any “brands” or “platforms” that Facebook owns. They use Facebook because their pixel and machine learning are far more sophisticated than any other social media platform, and they can optimize and scale for conversions. You can run an impression, brand awareness, or a conversion campaign with Facebook. That’s what many brands care about. It’s far more advanced than TikTok or Snapchat at this point.

They invest a lot of time investigating new social media platforms. The influencers they work with are allowed to post on whatever platform they prefer. Taylor and his team will simply track which gets greater engagement, greater reach, and better conversion rates. From the paid media side of things, they advertise on every platform. Facebook just seems to have the greatest ROI at this time.