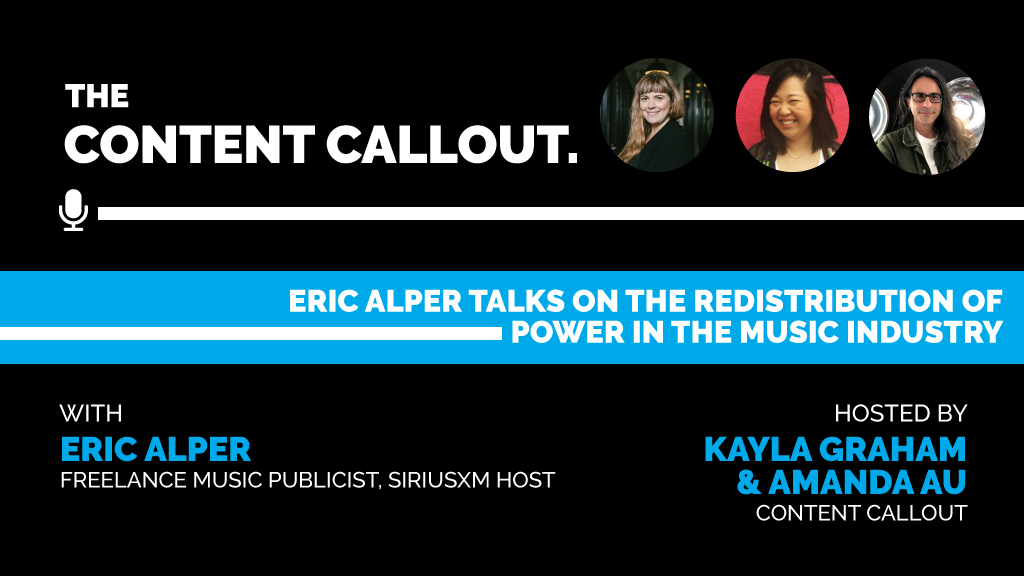 Eric Alper Talks on the Redistribution of Power in the Music Industry, Ep #15

How has marketing in the music industry changed? What hasn’t changed? How can an artist or their PR team capture an audience? These are just a few of the many questions that Eric Alper answers in this episode of the Content Callout podcast. He joins Kayla and Amanda to walk through an in-depth conversation about the music industry and how the world is swiftly changing.

Eric Alper is one of the most recognized music experts in Canada. He’s a music correspondent, radio host and was formerly the director of media relations at eOne Music Canada. He’s worked with artists like The Cult, Ringo Starr, Snoop Dog, the Smashing Pumpkins, and even Sesame Street. He shares some stellar insight into the world of marketing in music. Check it out!

What hasn’t changed in the music industry?

What hasn’t changed? Basic human emotions. Eric points out, “If you create a piece of content—whether it’s a post, a tweet, or a video—and you make them laugh, make them cry, make them angry, or make them extremely happy—they’ll share it.” To get them to that point, you have to differentiate between what you’re doing and what thousands of others are doing.

Everyone is on edge right now, and marketers need to consider that. You have to be careful with marketing and selling anything during the weirdest time of our lifetime. The biggest stress that you had on MySpace was choosing your top 8 friends. You didn’t have any other worries. Now people can lose their job over one stupid post or one ignorant tweet. Just because you have a voice doesn’t mean you have to use it all the time—or even at all.

How can your music compete in a crowded marketplace?

Eric notes that it depends on what kind of music you’re marketing. If your audience is between the ages of 8–25, chances are they’ll have no interest in listening unless you’re Kanye or Taylor Swift. Those artists are known for taking people on a journey with them. If you’re playing rock, there’s a place for you in the album world. But we are living in a singles world.

Everyone has their own niche, audience, and community. You build that one song at a time. There’s nothing wrong with releasing an album. But the focus needs to be on one song. No one will listen to an album unless they like one song first. If they like it, they’ll come back to the rest of your stuff. Eric shares how seizing the power of video can be one of the best ways to market your music. So keep listening!

The population has the attention span of a goldfish

Eric points out that as much as we are consumed with media and music, nothing sticks. If Trump has taught us anything in marketing, it’s that nothing sticks. We are so fragmented, and we all move on to the next shiny album.

Taylor Swift released “Folklore” earlier this year, which Eric believes is an unbelievable record for these times. It’s like she’s sitting at the kitchen table in candlelight drinking a glass of wine and singing songs with you. It was #1 for weeks, but no one is talking about it anymore. Everyone covered it in 24 hours, and then it was done.

Drake broke all-time records. He shattered the Beatles chart record. He broke Madonna’s top-10 record. He’s still under-valued and under talked about. Drake is arguably one of Canada’s biggest stars and one of North America’s biggest stars, but he isn’t talked about consistently. People move on to the next 1,000 things vying for their attention.

The future of PR in the music industry

Eric Alper believes that the music industry he’s known for the last 25+ years will be decimated. Traditional media such as newspapers and print magazines are in trouble around the world. We’ve seen stable magazines put music in the “other” or “more” section on their site—or go out of business entirely. We will see a breakdown of what we thought were immovable traditional media sources.

Eric doesn’t see touring happening until Summer 2021. The drive-in theatres are cute. But over 50% of people have stated they will never see a concert until there’s a coronavirus vaccine. 12% of people are saying they’ll never go to a concert ever again. Eric used to spend 80% of his day doing PR around tour dates. Either the world opens up again, and touring comes back, or 100% of his days are sharing a new single, video, or album.

Even if the world opens up again, advertising dollars are going to go to branding. People aren’t spending money on traditional media when they can spend less money on social media advertising and get a better return on their investment.

The new generation of music fans has no interest in buying anything. They won’t wait two weeks for the Rollingstone magazine to come out because it’s old news. Eric has way more bands interested in Spotify playlists versus getting in a newspaper. He’ll always lean towards that with his clients.