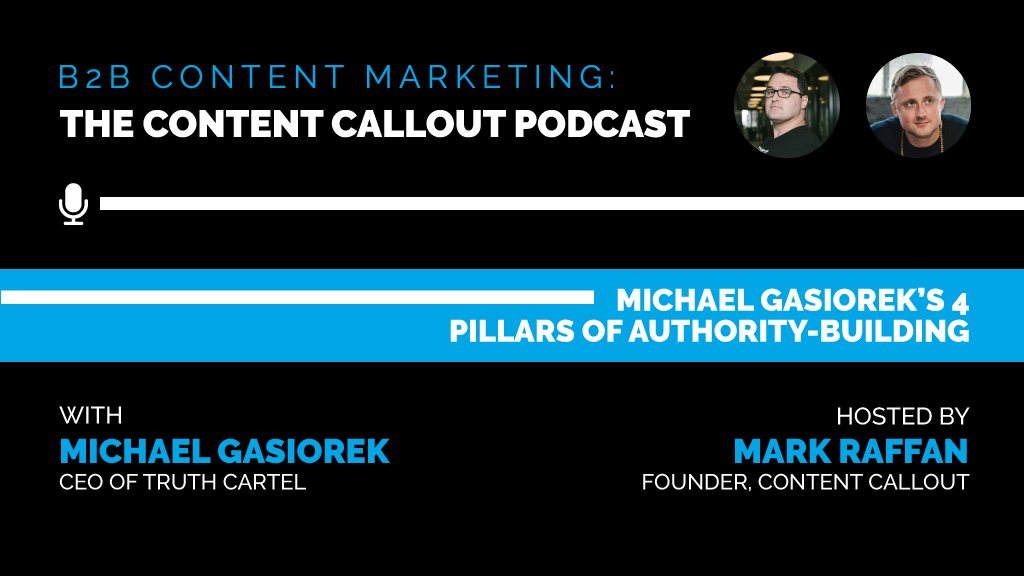 Michael Gasiorek is the CEO of Truth Cartel, a marketing agency specializing in emerging technologies. He’s also the Head of Growth at TrustToken, a top stable coin company moving billions of dollars globally every month. He’s also the owner of The Crypto, Medium’s largest blockchain-focused publication. He made waves in the content space as the editor in chief at Grind. To top it off, he grew Startup Grind to a massive readership—over 1 million readers per month. How did he do it? How did he build tremendous authority in their space? Find out in this episode of The Content Callout!

How do you build authority in your industry?

Michael follows four pillars to build authority in any industry. He promises that if you do these four things, success is inevitable. It’s a reverse-engineered process using research from the best minds in the industry, including books like “Influence” by Robert Cialdini.

A good company does a lot of the same things to build its brand. How do you do that at a tiny level without multi-million-dollar budgets? According to Michael, it’s as “simple” as reverse engineering how you build influence in an industry. You have to start with good, original ideas—you have to have some, or you wouldn’t be doing this.

You have to produce and promote great content. Put your good ideas out there. That makes those ideas scalable. They will live beyond you. A good idea put into a piece of content is a product. A product has growth loops. It can be spread by word of mouth or SEO. You can talk about an idea with friends, but that’s as viral as it gets. But a product has the potential to go viral.

Unless you have fans, that content won’t build cumulative value. So Michael recommends picking a channel and committing to it. New marketers and early-state companies try to dominate every channel at once. But there’s nothing worse than fraying a plan that isn’t fully baked. You could focus on email marketing, SEO, or Twitter. You work with an expert in each one and do it well.

If you have an audience and you have great ideas for them, they’ll come back to you for more ideas. That’s how you go from being an analyst to being a leader. You have an opinion someone respects.

So many people put out a news broadcast without an opinion added. They’re afraid of putting their opinion out there. But your opinion is one of the keys to developing great content. Michael notes that “People’s analysis is rarely as valuable as their opinions.” Even if you have people disagreeing with you, it’s great. Why? Because it means they care. The opposite of love isn’t hate—it’s apathy.

Pillar #3: Connect with leaders in your industry

Whenever you are given the chance to provide value to and interconnect the audiences of people who are leading in your industry, it’s good for everybody. That’s why you do guest posts, panels, and podcasts. You’re sharing original ideas with new audiences. But it also allows the thought leaders to connect and have each other’s backs. You’re building a richer network with better ideas and more opportunities. Affiliation with industry leaders is key to moving up the ranks.

You go from being a nobody, to having a few friends, to having powerful friends, to breaking into institutional approval. A guest post on Ink, Entrepreneur, or Huffington Post can be pivoted into a guest post on an email or a newsletter. Maybe you’ll get to speak at a venture fund, become an adjunct professor, or get a reward in your industry. Each of these things compounds and makes everything else easier. This makes it almost inevitable for you to become an opinion leader in your space. It takes months of grinding before something clicks.

What are Michael’s 5 P’s of content marketing? Why should you do ANY of it? This whole episode of Content Callout is packed with can’t-miss information, straight from the mouth of marketing genius Michael Gasiorek. Don’t miss it!

Listeners: Have a suggestion for an easier Twitter handle for Michael? Give him a shoutout on Twitter @gasiorekm.