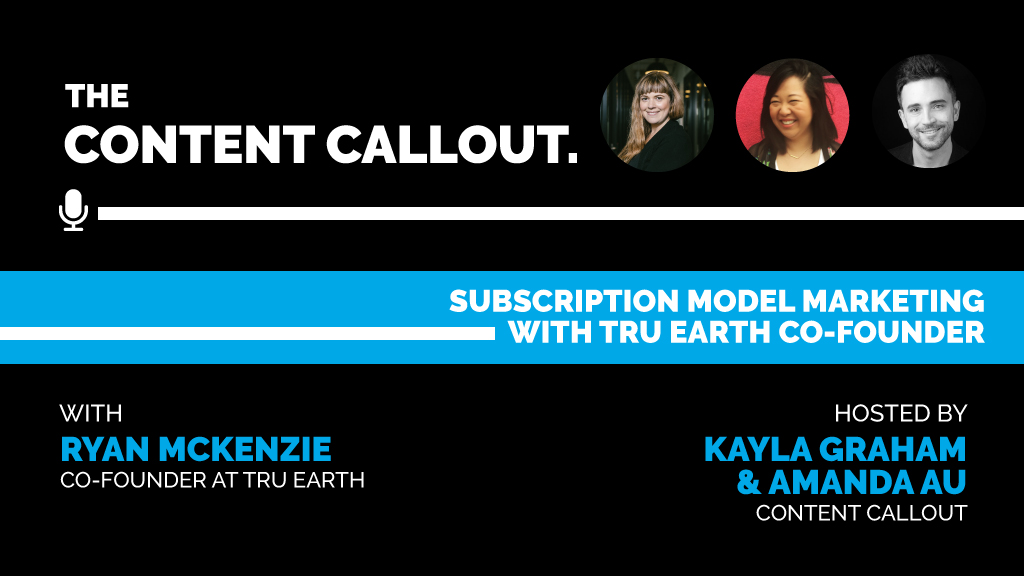 Tru Earth launched April 2nd, 2019. 1,500–2,000 people subscribed in the first month. Now, they have 66,000 active subscribers across the world. They’ve kept 1.55 million detergent jugs out of landfills. How did they achieve such spectacular growth? What was the motivation behind creating a laundry detergent subscription model? Co-founder Ryan McKenzie joins Kayla and Amanda in this episode of The Content Callout to share their impactful journey of subscription model marketing—don’t miss it.

How Tru Earth was created

Ryan worked heavily in the subscription box space for a couple of years. Long story short, his business partner’s friend had invested in laundry detergent strips. Knowing Ryan’s background, he told them that they should start a subscription box with the strips. They bounced the idea around but thought it would be a tough sell, so they didn’t move forward.

During this time, Ryan’s wife was pregnant with their third child. He was watching some YouTube unboxing videos with his two young children. The packaging, the toys—everything was made of plastic. What impact could that have on the environment? What was the future going to be like for his children?

He realized he wanted to contribute in some way. So he revisited the pre-measured laundry strips with his business partner, Brad. They asked for some samples, with low expectations of their usefulness—but they worked really well. Not only that, but they were eco-friendly: hypoallergenic, paraben-free, chlorine-free, biodegradable, and vegan.

Between 700 million and 1 billion bottles are used per year in the U.S. If they can keep a significant amount of that plastic out of landfills, Ryan will be happy about the impact it has on the planet.

Why they chose the donation model

With every new subscription, Tru Earth donates laundry strips to food banks, hospitals, doctors, and partners around the world. When COVID hit and they started seeing the impact in Vancouver, they had no idea what was going to happen with their business. They knew many people would be in a tough spot. Why not take the opportunity to support the people struggling? If people can’t afford to live you can’t save the planet. It isn’t a marketing play—they simply want to be good human beings. Since launching this initiative, they’ve donated over 2 million loads of laundry to those in need.

Running a business is humbling and inspiring

Since launching Tru Earth, Ryan has learned everything from how to deal with customers whose cards bounce to customer service and beyond. It’s wild. Ryan admits that it’s weird and completely humbling. The bigger this thing gets, the more impact he can make. The more impact he can make, the more fulfilled he is going to be as a human being. He emphasizes that if you’re chasing money, you’ll always be disappointed. But when you chase a cause and create impact, it’s much more fulfilling.

Why you should give your subscribers options

When they first launched Tru Earth, Ryan shares that they made the mistake of only offering month-to-month subscriptions. They wanted it to be simple. But the truth is that not everyone is the average family of four. If you’re just one person, a box may last you a few months.

People were getting too much product. Every month when they got their subscription, it was a negative reminder that they needed to cancel their subscription and it was inconveniencing them. They were creating negative feedback loops and a negative brand association. So they shifted gears and now offer monthly, bi-monthly, quarterly, every 6 months, or a one-time purchase.

As soon as they started offering variety, the lifetime value dramatically increased. Overall cancellations started declining when people started getting the right amount of laundry detergent that they needed.

When you’re creating copy for a product you’re not the one buying it. You have to take feedback from your customers. It’s hard to know how to position things on the selling side until you ask questions. There’s a lot that you don’t think about if you’re not the consumer. Act through the user and think through what you offer. Don’t offer one frequency if you sell a consumable. People consume things at different rates.

Why should you give products away for free whenever you can? Listen to hear how this tip works wonders for Tru Earth. In this episode, Ryan shares other strategies to grow and scale your business. Don’t miss it!