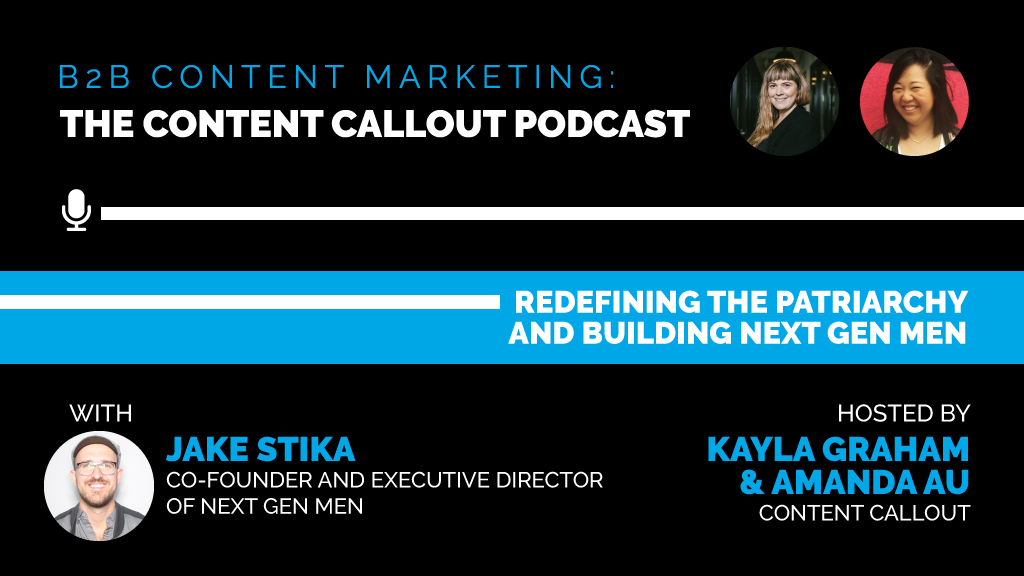 Redefining the Patriarchy and Building Next Gen Men with Jake Stika, Ep #33

Patriarchy is made up of two Latin words, meaning “father power” or “ruling “father.” Jake Stika—the co-founder and Executive Director of Next Gen Men—notes when we look at society, we see examples of patriarchal structures. It could be familial, with the father as the breadwinner and protector. It could be systemic, with monarchies and lords.

In modern times, one of the two spheres where the most power is held is Fortune 500 companies. Only 32 out of 500 CEOs are female (7%), so it’s easy to see the power is still patriarchal. Global heads of state are still only 7% female representation. People don’t believe we exist in a patriarchy, but it’s easy to demonstrate. Everyone is affected by these structures. How do we change that? Why is change so necessary? Listen to this episode of Content Callout for a deep, eye-opening, and important conversation about redefining the roles of men in society.

How to demonstrate that the patriarchy still exists

Jake notes that there’s a difference between the individual and the overt, and the implicit and the systemic. In general society, we don’t have as much overt racism and sexism as we used to see in the past. But we see all of the residue of that history in our systems. Maybe Canadians are nicer, but those systems are still in place.

It’s important to understand the different relationships. We know that trans and non-binary and other people are trying to move beyond the containers of gender norms and that they face discrimination. Women’s experiences—whether a wage gap, gender-based violence, representation in leadership—is an epidemic.

But men represent ¾ of all suicides, die on average four years earlier than women, and are the #1 victims of violence. They deal with increased rates of substance abuse, incarceration, and homelessness. You can see that these individuals face pressure under these systems.

Creating awareness in the market

The reality is that because this topic is so politically charged, there are a lot of people that care about it. Jake believes that the goal is to build a bridge of understanding and show you’re working toward the same outcomes. One of the worst things you can do in marketing is say, “Who’s your market? Everyone!” You’ll never get traction. They’re focusing on the people who see the issue in a similar way and looking for ways to be involved.

You have to acknowledge the harms that are happening to other people while speaking about the pain they’re experiencing. When Jake talks about a future where boys and men are experiencing less pain, they’re speaking to men’s rights activists—while advocating that there’s a different way to change things. By arguing that men should experience less pain to cause less harm, they’re speaking to the fact that women are getting the raw end of the stick. It’s acknowledging the tension and saying there are problems on both sides.

Identity crisis is what leads to change

A lot of research shows that a crisis must happen before change occurs. If patriarchy was a stream, there’s a current. The female fish swim against the current. For male fish, the current takes them where they want to go—until they find still water, get fished out, or have to compete against other fish. That looks like job loss, divorce, identity crisis, substance abuse, etc. We call them sensitizing experiences. It’s those experiences that make you question that water.

One of the only positive sensitizing experiences is the transition to fatherhood. If they have a daughter, there’s this trope of the Dad polishing the shotgun. So men know there’s a stigma that guys do awful things, but rather than helping men seek positive change, you protect your girl with the shotgun.

The research—and Jake’s experience—shows that most people who are interested in Next Gen Men have had one of those sensitizing experiences.

How do we change gender stereotypes? How do we remove harmful phrases and ideology from our vocabulary? How do we exact change in society? Jake shares his thoughts on these topics and his vision for Next Gen Men. Listen to the whole episode to learn more!

All about Next Gen Men

Jake shares that “Next Gen Men is working to redefine—and undefine—what it means to be a man by promoting positive masculinity, healthy relationships, mental wellness, and gender equity with youth in communities and workplaces.” Why? Because patriarchy hurts both men and women, and they want a future where boys and men experience less pain—and cause less harm. To learn more about Next Gen Men and how to contribute, head on over to their website.