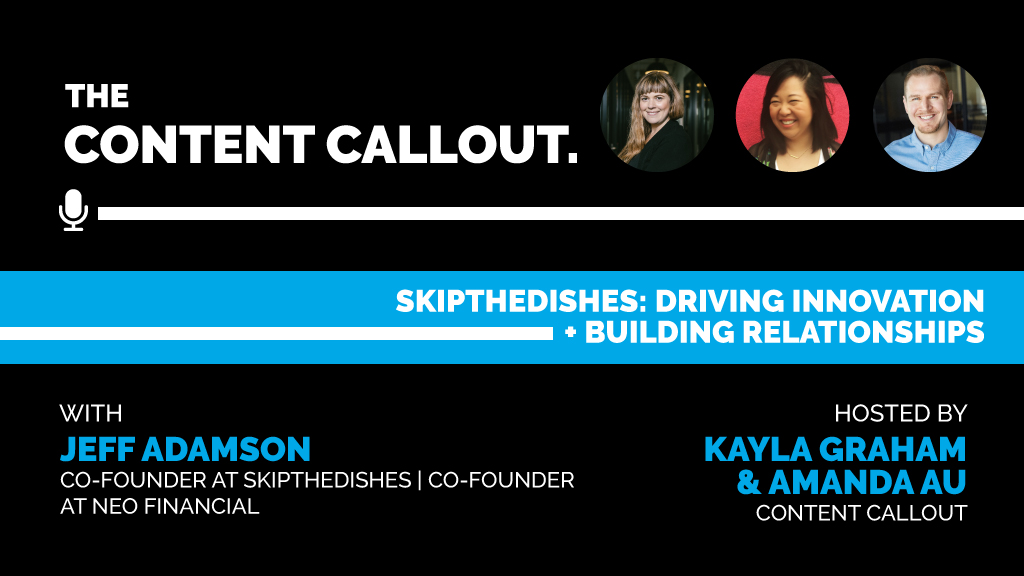 Jeff Adamson was on the Canadian National Team for wrestling. In 2012, he went to the Olympics. But after Jeff was done with his athletic career, he had to figure out what came next. Jeff points out that it’s a really difficult transition for most athletes. Luckily, he went from one singular goal to another: wanting to win a gold medal to wanting to build a multi-billion dollar company.

He simply had to answer the question: What is my purpose now that I’m not focused on my sport? In this episode of Content Callout, Jeff walks us through his entrepreneurial journey. He shares the vision behind SkipTheDishes and Neo Financial, how impact trumps messaging, and how to deliver value to your customers. Don’t miss it!

The vision for SkipTheDishes

SkipTheDishes was the brainchild of Jeff’s co-founder, Josh Simair. They both grew up in small communities. The best and brightest always seemed to move on to greener pastures. There was the stigma that if you wanted a high-performing career, you had to leave Saskatchewan.

At the time, online ordering from restaurants wasn’t being done in Canada. You could get a cab, dry-cleaning, and on-demand babysitters in the big cities but certainly not in mid-market cities. They decided the next wave of technology would be marketplaces to get what you want but have someone else do it for you.

Why Jeff took a leap of faith

So in 2012, they quit their jobs and dove in. Jeff points out that many look at people like them and say, “These are entrepreneurs; they’re just wired differently.” But Jeff points out that isn’t the case. His mom worked for a hospital, and his dad was a firefighter. Jeff didn’t go to a business school.

He just didn’t want to wait for more responsibility. He wanted to take the leap now. He emphasizes that your twenties is the time to take the risks. Succeed or fail, he just wanted to learn as much as he could. Being successful would be a bonus. He could always learn to make use of the skills he developed later on.

It’s all about relationships

Jeff and Josh had to convince people that being in the prairies was a strength—not a weakness. There is access to a talented workforce that is humble, down-to-earth, and hard-working. They aren’t above doing hard work. It’s a huge advantage that you don’t get in Silicon Valley. People want glamour jobs and a stamp on their resume.

One of the huge unspoken benefits (or attributes) of hosting companies in the prairies is that people are relocating there for a purpose. People working in New York, San Francisco, and London tend to be just passing through. Not many people call those areas their lifetime home. People don’t invest in relationships because of it.

But Jeff wants to build enduring lifelong relationships. He firmly believes that happiness is tied to the relationships that you have. It’s what people think about on their deathbed: the people. If you invest time in someone, you both get something out of it, and you’re better together.

What was Jeff’s journey from building SkipTheDishes to Neo Financial? How can it help people take control of their finances? How do they continuously build customer-centric businesses? Listen to hear the whole story!

Don’t let the odds overwhelm you

When people are thinking about a career, they have a lot of fear—which is healthy. You can’t be naive. But Jeff says to ask yourself, what are your priorities right now?

When one of Jeff’s Olympic teammates was going into the biggest match of his life, he was calm. Jeff asked how he was so calm, and he replied, “At the end of the day—whether I succeed or fail—things that are the most important to me aren’t going to change. My wife and my family will still love me. I’m not going to die. I’m healthy.” If you have relationships and health, life is beautiful.

What happens if you succeed? What happens if you fail? Are you okay with both scenarios? Jeff’s goal was to learn a ton with SkipTheDishes. He knew he’d be fine. He points out that you can always find a job and make more money. Canada is a fair and free country. If you’re hardworking, you can find success.

The bottom line? Don’t let the odds overwhelm you. Entrepreneurship is on the rise. People understand they need to go for it. Success isn’t just about money. You have to hustle in your 20s and 30s when you have the energy and less responsibility. It won’t get easier the longer you wait. The best time was yesterday. The second best time is today.