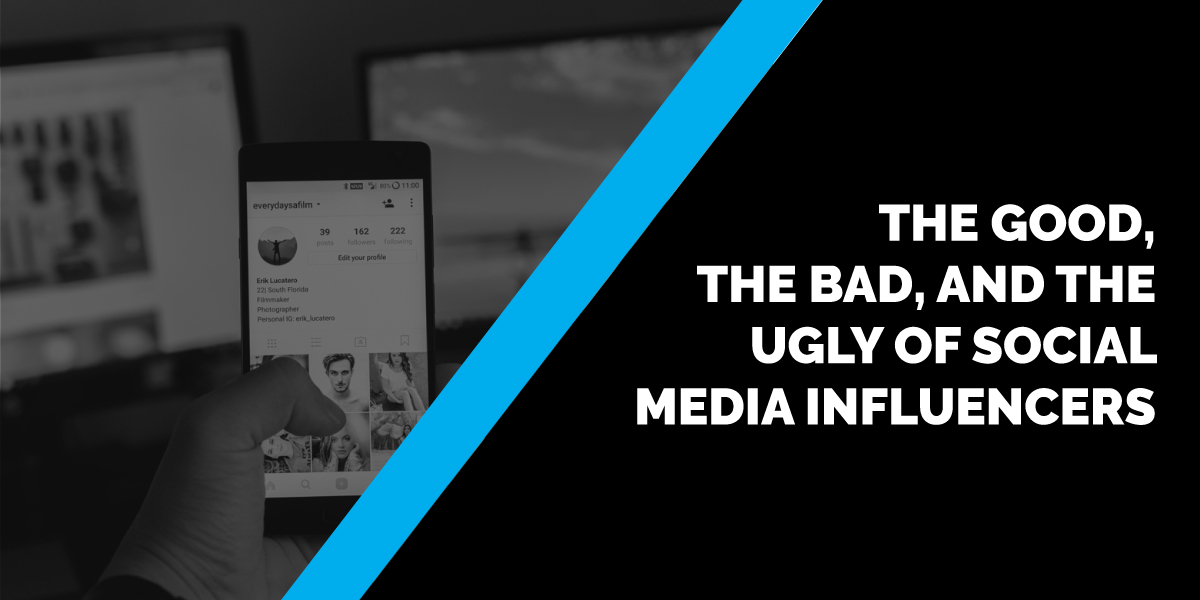 The Good, The Bad, and The Ugly of Social Media Influencers

Brands have been working with influencers for years. For instance, Lululemon has been using community members as ambassadors since its start as a local yoga and fitness boutique. Well before this, Coca Cola used a more famous influencer—Santa Claus—to promote its brand.

It’s only logical that influencer marketing would flood social media—where human connection is the rule.

A social media influencer has built credibility in a specific industry. They often have broad audiences. And they can persuade followers to use products they suggest. Influencers can be celebrities, famous athletes, or regular people. Using them lets brands show real people flaunting their products or services. In this way, influencer content works like user-generated material.

Influencers can promote products organically. And they improve brand reach. The best influencers can build brand credibility, increasing customer loyalty. They also help a company tap into niche audiences. To be successful, though, they need to be trustworthy. Ideally, influencers resemble peers, making brands more relatable to the everyday user. They have the power to humanize brands and give them a face.

Studies show that Instagram users want authentic influencers. Brands benefit from original content. And Glossier, a skincare and cosmetics line, proves this. Rather than paying for big-name celebrities, Glossier uses regular people to spread the word. They use everyday customers as influencers to showcase their minimalist products. Their popularity has soared with the use of micro-influencers. These diverse influencers are down-to-earth. And since they feel like peers, followers trust their opinions.

Influencers can reach countless people. But they need to approach audiences with authentic content; staged product endorsements can kill an influencer’s impact. Rather than look like glaring ads, influencers should tell stories in their style. An influencer’s true story builds brand image. On the flip side, perfected pictures or careless endorsements are usually a miss. For instance, when posting a photo of herself wearing Adidas Kicks, Naomi Campbell accidentally shared the company’s instructions.

Staged content can reflect poorly on a brand and its influencer. And blatant promotions can cause an uproar in social communities—with the fallout from followers being equally harmful. In one example, influencer Scarlett London received criticism—and even threats—from online viewers over her staged Listerine content.

Social media influencers can hurt a brand’s reputation. And at worst, they can harm those taking their advice. Influencers have been criticized for promoting harmful products. Famous influencer, Kim Kardashian West, was called out for promoting appetite-suppressing lollipops to young followers. She also caused controversy for promoting a morning sickness drug on Instagram. In this case, she failed to mention the side effects—or that a drug company was sponsoring her. Despite a warning from the FDA, she posted another promotion for the drug.

Influencer fraud—where influencers get a following through bots and fake accounts—is also troubling. Dishonest influencers can damage a brand’s reputation (as well as drain their budget). Fake followers create the illusion of reaching a large audience. And when an influencer’s account is full of fakes, brands are paying to reach people who don’t exist. A report by a cybersecurity firm projects these bogus accounts will cost brands $1.3 billion in 2019. Instagram and other social media users want genuine advice. So, companies need to research and choose wisely.

Influencers can make or break a business’s success on social platforms. Their content has the power to help brands market authentically. At their best, influencers increase credibility, loyalty, and sales. But at their worst, influencers make a company look phony or irresponsible—and potentially cause harm.