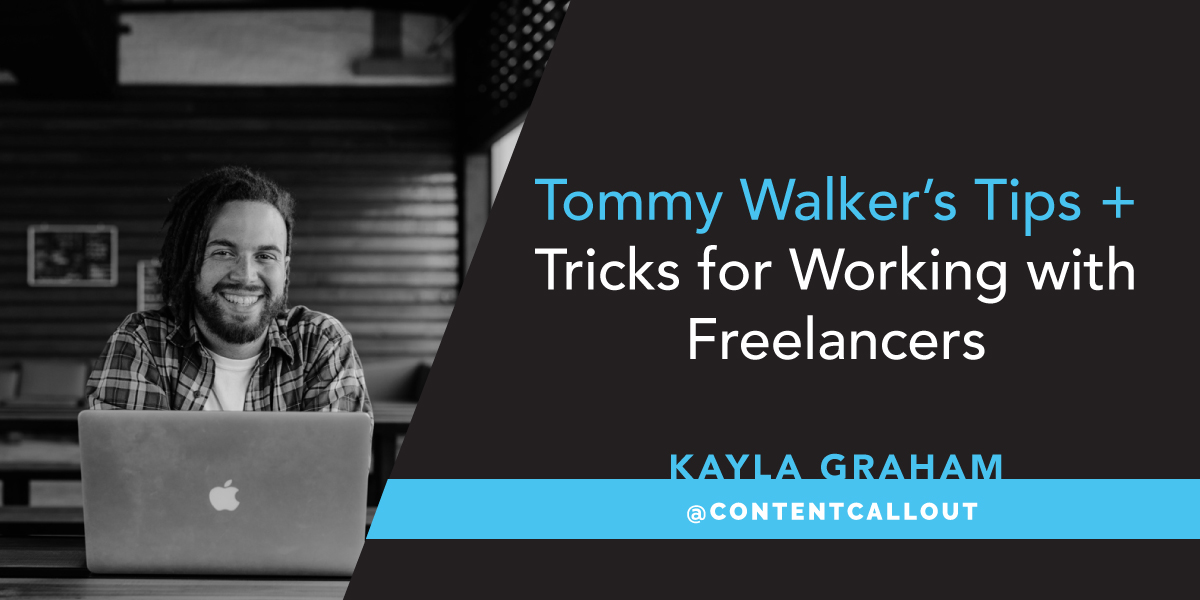 Don’t be afraid to outsource

Tommy agrees that outsourcing can be a valuable tool, one that is often underutilized. Tommy notes that he only had full-time employees at Shopify, and that was after he was a year and a half into the job. He’s always worked with freelancers and treated them as part of the team.

In a lot of situations in many businesses, the relationship between freelancers and the hiring manager is one-on-one. Tommy prefers to bring the freelancers together like an actual team to brainstorm together, work on projects together, and celebrate together. They’re all given access to the same content calendar, so everyone knows what each person is working on.

Before Tommy ever wrote a blog post anywhere he was hired, he spent three months learning to understand the heart and soul of what content they were going to create. Hannah Abaza at Shopify would say, “Content is too important to be left to the content team.” So Tommy tried to navigate the organization’s network to find out what they think the company means to them. Then he’ll ask customers what it means to them.

He’ll look at what’s missing in the space and get as much information as possible. He takes this information and creates what he calls the “Content Code,” a summary of the heart and soul of what the publication should be about. It’s about defining the voice and heart of each piece of content.

Assessing the quality + caliber of freelancers

Tommy had the distinct pleasure of working with Aaron Orendorff (Content Callout episode #8) for years as an editor. Tommy has also worked with Emmy-Award-winning journalists and New York Times published authors. One of his guys authored several “For Dummies” books. Tommy was careful to bring in quality authors as content contributors wherever he worked.

Once he’s defined his content code for his company, he puts out a job post informed by what the vision is. This usually attracts the right people and repels the wrong ones. He’d often receive 150 applications in 24-hours. As part of his process, he’d go through each applicant and ask for three of their most representative blog posts. He’d then narrow the applicants down to a short list.

Then he’d go into a hard-core full edit of one of their published blog posts that they thought was their best piece. It showed them what he expected from them and their pieces. He looked not only at the quality of their work but how they respond to the edits. If they weren’t defensive about the edits in a one-on-one interview—and they were on board with the content code—it helped determine if they’d be a good fit to work together.

Because of this process, he’s never had a freelancer flake out. He takes the time to show them that he is invested in their career. It’s because he started as a freelancer and understands the intimate relationship between freelancers and editors. You’re judging whether or not their writing is good, their information is good, and the quality of this thing that they’ve put a lot of effort into. He tries to be as respectful as possible.

How to take ego out of the equation

How can a freelancer take ego out of the conversation when they’re getting tough edits? When Tommy was freelancing, he was on the brink of homelessness. He was getting paid $200 an article. He had a kid, and his wife was pregnant with their second. They were in a tough spot. He needed to produce high-quality work right out of the gate. He didn’t have any ego involved because he needed to get paid—and he wanted to improve his skills.

You have to take ego out of the game and realize that there will always be someone smarter, more experienced, and better than you (even if you’re at the top of your game). Tommy emphasizes that you need to take every opportunity to learn, even if the criticism is delivered harshly. Tommy has worked with numerous editors over the years, and each of them lives in his work. You will never improve if you can’t take feedback.